On July 31st, I saw that share prices of Potash nutrient companies (e.g., Agrium (AGU), Potash Corp (POT), Intrepid Potash (IPI)) had taken double-digit falls on news that Uralkali was walking away from the BPC cartel.

Mosaic Corp. (MOS) in particular caught my eye because as a socially responsible investor I had seen the company on several SRI lists (e.g., Corp Responsibility Magazine’s list). And besides, the contrarian-side of me couldn’t wait to jump on MOS shares.

So I set out gathering data on the fertilizer market, feeling very bullish on Mosaic before even having a stab at the documents. Part of any good due-diligence, of course, is reading what SA authors are saying. However, several seem to be looking at MOS with rose-colored glasses. I now feel it necessary to “set things straight” on Mosaic. This article is a rebuttal of their logic.

They say: Several writers noted Mosaic’s low 10x price/earnings ratio.
I say: I believe this number’s deceiving and based on trailing earnings. Going forward, Potash prices could decline as low as $280/metric ton, according to Goldman Sachs. The lower prices are indicative of the constant oversupply condition of the industry and change in industry structure towards higher production. Lower Phosphate prices, in turn, boost the P/E ratio as the earnings denominator declines. I prefer to think of a P/E as expected earnings growth. So a P/E of 10 would infer 10% growth for the next year. I believe a 15% decline is more likely. Several sell-side analysts (who are typically bullish) expect EPS to decline from $4.08 in FY’13 to about $3.50 next year. (Note: EPS may be higher if the company repurchases shares at year-end.)
(click to enlarge) 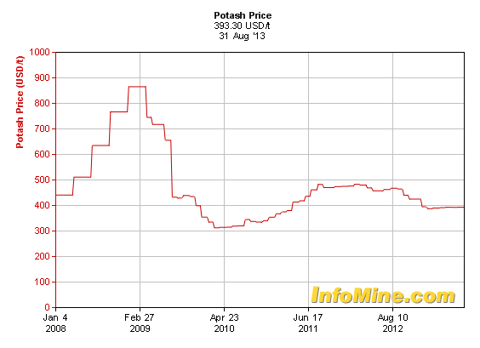 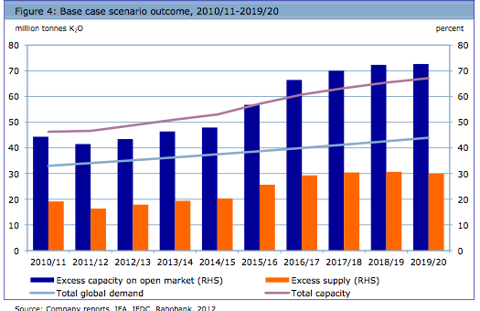 They say: Some investors think Mosaic is protected by its large phosphate business.
I say: Over 60% of Mosaic’s earnings are from its smaller Potash business and, secondly, the Law of Substitution will suppress phosphate prices. While the two nutrients are indeed different, farmers tend to buy higher volumes of whatever’s cheapest at the time.

They say: There is a secular upward demand trend for fertilizer from Emerging Markets, especially the BRICs.
I say: This trend is not new and is already baked into prices. Further, weak currencies (attributed to the Fed tapering), falling subsidies and slowing population growth will reduce Emerging Market demand. While anecdotal evidence says that China’s population is growing rapidly, in fact, its population is expected to grow just 1% annually.

Yearly Chart of the Indian Rupee 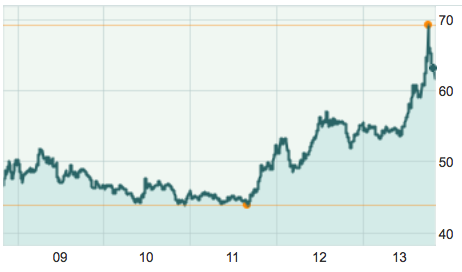 They Say: One SA writer said, “Uralkali failed to substantiate plans to increase supply.”
I say: Uralkali expects to ship over 10 million tons (MT) of potash in 2013 and their stated capacity is 13mt. Further, it has already secured an agreement with China. In fact, China recently purchased a 12.5% stake in Uralkali to secure supplies.

They say: A SA writer said that Uralkali’s management won’t have time to increase production because it will be distracted with legal battles related to its arrested CEO.
I say: I believe that legal issues will be handled by the company’s legal team. A CEO’s duties are to set a company’s strategy, mission and build its culture.

They say: Another SA writer believes the cartel will resume soon.
I say: I believe this is doubtful because Uralkali’s CEO has been jailed (now under house arrest) and he’s supported by Uralkali’s Board of Directors. There is also the risk that the other side of the cartel, via North America’s Canpotex, could also break up. Further, do you really think the Chinese favor higher potash prices?

What’s working for Mosaic?
I think the best thing going for Mosaic is its management. It’s an offspring from one of the most successful private/family businesses. As such, cash and liquidity are high and I expect a large share-repurchase program. Expect a press release on the share repurchase amount soon as the company will no longer be restricted from buying-back shares after November 26th. What distinguishes the company from other miners is its progress in corporate social responsibility. Though the company’s mines remain a work-in-progress, Mosaic is a leader in governance and reporting. In 2011, Mosaic became a founding member of the Global Reporting Initiative. In 2012, it became a signatory in the United Nations Global Compact (deals with Labor issues).

Conclusion
A friend once told me that good portfolio management is actually good risk management in disguise. And given that the S&P 500 is so elevated (as well as its P/E) it makes sense to trim your gainers and buy into a small MOS position. Then wait and see how the Potash market unfolds.