Below, SRI provides a directory/list of Exchange Traded Funds (and Exchanged Traded Notes).

These ETFs are provided on a global basis, as this website’s audience has become global. Data is provided by Bloomberg LLP.  Reading the table left to right..

As one can see from the list below, while Exchange Traded Funds for SRI are growing rapidly, there still are few to choose from.  If you simply want to invest in a Clean index, then ETFs are for you.  But for most investors, it is recommended that individual stocks, and Mutual Funds be investigated.
Source:  Data is provided by Bloomberg LLP 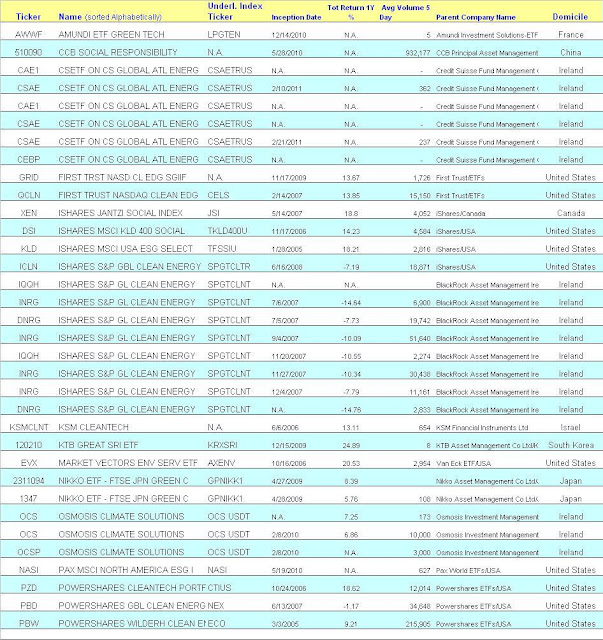 The enclosed article is from a writer called Nizam, who blogs for Penn Olson.  He’s described as a flamboyant Media and Communication graduate from Singapore Polytechnic. This is an interesting, growing website, with a growing list of bloggers, and an Asian flare.

It’s always good to have another perspective, which this site gives, though it heavily advertises on its website, a big “turn-off” for me.  Below Nizam, chose and wrote about his favorite Socially Responsible Companies.

Corporate Social Responsibility (CSR) is essentially about doing good and doing well. Generally, it refers to the process of integrating social values and mission within business decision-making process, so as to achieve positive and sustainable outcomes towards the business, environment and the community at large.

Many companies nowadays believe that they have this responsibility to give back to society. Such socially responsible companies see to it that this act permeates everything they do.
Here are 5 companies that stood out, in my opinion, as great examples of how social responsibility can be productively coupled with sound strategies to advance goodwill, while building sustainable and impressive businesses.

In April, Vodafone promised to cut down their carbon dioxide emissions in half by 2020 through improving the energy efficiency of its global mobile-phone networks. Additional points for Vodafone on CSR because they are constantly updating us with the results of the campaign; no matter whether it’s going well or not.
Future promises includes pledging to recycle 95% of network equipment waste and plans to reduce work-related accidents that cause lost time by 10%. On top of that, Vodafone is a leading business in socially responsible products such as the text-to-speech software for blind people and easy-to-use handsets for the elderly.

The Body Shop can be considered one of the pioneers of modern corporate social responsibility. Founder Anita Roddick led her company to stand up for its beliefs and champion causes such as self-esteem, environmental protection, animal rights, community trade and human rights.
One of their major achievements was back in 1985, where they managed to work with Greenpeace and garner more than 4,000,000 signatures against animal testing in the European Union. They have also contributed significantly to the causes they stand for, and exemplifies how others can do the same thing.

Since the beginning back in 1971, Starbucks Coffee aims on acting responsibly and ethically. One of their focuses is the sustainable production of green coffee; C.A.F.E.
The project practices a set of guidelines to achieve product quality, economic accountability, social responsibility and environmental leadership. On top of that, the company supports Ethos Water; a company that brings clean water to more than 1 billion people who does not have access to it.

The founders of Ben & Jerry’s, Ben Cohen and Jerry Greenfield have infused the company with the notions of giving back in every way possible, as well as “linked prosperity” between the company, its employees and the community.
Since they started, they have been donating a full 7.5% of pretax profits to charitable organizations. In their own words “strive to show a deep respect for human beings inside and outside our company and for the communities in which they live.”

The bank’s head of corporate sustainability, Teresa Au, has said that despite the economic situation, HSBC would continue to support its sustainability campaign. Initiatives include providing small businesses with sustainability insurance options and developing an index for climate change.
The business has also boosted its management of ethical and socially responsible investing funds by 60% over the last two years. HSBC has an American unit that is dedicated to assisting local communities by promoting affordable homeownership, among other goals.

Disclaimer: All images are labeled for reuse by Google.

Gee, right after we finished writing our 5-part series on SRI Trends, SocialInvest.org released its latest survey on the subject.  I read the report to determine if there were any changes worth talking (actually more like writing) about.
The biggest change, or more like surprise, was the continued growth in SRI assets, despite the troubling waters of capital markets.  In fact, SRI has not only become increasingly popular, but Hip!  From the start of 2007 to the beginning of 2010, SRI assets increased more than 13%.  Total AUM was $3.1 trillion excluding the effects of overlapping strategies.  (See table).  This compares with anemic growth of 1% for overall professionally managed assets.  Demand for Socially Responsible Investments has come from the “grass-roots” efforts of investors, and not from the institutions (or their portfolio managers) themselves.

The fastest growth of what’s categorized as ESG investing vehicles was what is called Alternative Investment Funds.  The Social Investment Forum Foundation identified 177 of these vehicles with AUM of $37.8Bn.  Alternative investments vehicles include ones I’ve focused on in my 5-part Series such as Hedge Funds (mostly quant funds) as well as private equity.  Can private equity really do good, or is this an oxymoron?
The number of alternative investment vehicles incorporating ESG criteria increased 285% since 2007, while AUM grew an even faster 6x.  Surprisingly, leading investment criteria were clean technology versus what I had expected would be quantitative funds that screen.
On the U.S. Registered side of SRI, there were 281 mutual funds with $320.3Bn under management.  Most of this was to the ever familiar mutual funds.  The smallest share was to Closed-end funds (just a bit over $200MM).  However, the fastest growth was in Exchange-Traded-Funds (“ETFs”) growing 225% since 2007, to $4Bn.  While still a relatively small AUM, we expect ETFs to continue leading the way in SRI.  As mentioned previously, we like the growth being witnessed here, but are disturbed by the disassociation of the individual investor from the ETF’s investments, and the tendency of ETFs to become like casinos.  (Please review Part V of our SRI Trend series for additional information.)
Going forward, I continue to expect ETFs to grow quickly as well as Social Venture Capital and Private Equity.  As you know, I’m no fan of ETFs or of Private Equity.   However, Social Venture Capital (and Social Enterprise) are areas I believe SRI can really make a difference in society.
The question is:  Would you rather help society, or make a quick-buck investing in an ETF ?
The below article is the last in our 5 part series on SRI Trends:
4.  Growth of Exchange Traded Funds (ETFs).  This is an area that may well need little, if any introduction.  Though a recent addition to investment portfolios during the last decade, ETFs have become an overnight sensation.
Definition:  ETFs offer public investors an undivided interest in a pool of securities and other assets and thus are similar in many ways to traditional mutual funds, except that shares in an ETF can be bought and sold throughout the day like stocks on an exchange through a broker- dealer.  ETFs therefore possess characteristics of traditional mutual funds, which issue redeemable shares, and of closed-end investment companies, which generally issue shares that trade at negotiated market prices on a national securities exchange and are not redeemable (Source: Securities and Exchange Commission).
History: In the beginning, ETFs were more simplified investment vehicles utilized to mimic the S&P 500 index.  The first major product, SPDRs (introduced in 1993) was nicknamed “Spiders.”  As you can see, the ETF industry had creative marketing popularizing them since Day 1.  However, ETFs took off in the early 2000s, when Barclays Global Investors launched the ishares line.  Within 5 years, iShares surpassed all of its competitors.  Since then, new competitors have entered the market slicing and dicing industries and sectors into a thousand pieces.  According to the Investment Company Institute (ICI) the number of ETFs grew from just 29 in 1998 to 797 by 2009, representing $777Bn in assets.
It was only a matter of time that ETFs would move out of its humble beginnings as a broadly based index fund, to a mimicker of certain Socially Responsible Indices, such as those following the popular, and longest-running Domini Social Index (now called FTSE KLD 400).  According to Morningstar, there were over $3.2Bn in about two dozen SRI related ETFs as of mid-2010.
This website will not advocate investing in ETFs for a variety of reasons.  For starters, they attract a speculative nature (e.g., animal spirits) in people.  I just can’t reconcile the “making of a quick buck” with ethically-based SRI.  Other negatives include:  Tracking error, Index Composition, sometimes-high management expenses, opaque operating structure, and hidden fees.  Hmm, maybe the ETF holding company itself should be analyzed for ESG criteria!
SRI ETFs, given their niche nature only exacerbate these potential disadvantages.  For example, by default, an ETF tracking the S&P500 will likely have much lower fees and little tracking error, compared to a small, new, exotic ETF tracking solar energy.  Besides, nearly all of the SRI ETFs are invested in “Green-Energy” indices, rather than indices of socially responsible corporations (regardless of whether they’re in green industries or not).  Also, much has been written about surprise investments within ETFs including shares of Halliburton, and BP/Transocean.  As I’ve stated previously, but bears repeating, the individual investor’s desires and moral suasions become disconnected from the ETF’s investment process, and hence, positions.
If you must invest in pooled assets, I recommend screening MorningStar for SRI-based mutual funds.  Morningstar actually uses another name for SRI, calling it Socially Conscious funds.  It defines them as,
“Any fund that invests according to non-economic guidelines. Such funds may make investments based on such issues as environmental responsibility, human rights, or religious views. A socially conscious fund may take a pro-active stance by selectively investing in, for example, environmentally friendly companies, or firms with good employee relations. This group also includes funds that avoid investing in companies involved in promoting alcohol, tobacco, or gambling, or in the defense industry.”

The most popular include some of the better-known fund families in this area:  Parnassus, Ariel, Pax World, Amana, Calvert, Domini and Sentinel.  Similar to ETFs, SRI mutual funds have grown at a rapid clip.  As of 2007, there were 260 socially screened mutual fund products in the US, with assets of $201.8 billion. By contrast, there were just 55 SRI funds in 1995 with $12 billion in assets (Socialinvest.org).

5.  Community investing is directing capital from investors and lenders to communities that are underserved by traditional lenders.  According to the Social Investment Forum “Community investing provides access to credit, equity, and basic banking products that these communities would otherwise lack.”  Assets in community investing institutions rose about 32% from $19.6Bn in 2005 to $25.8Bn in 2007.  I am a great believer of this type of investing; however, it is out of the scope of this website, hence the quick description.  Interested readers are urged to link to Communityinvest.org.