Skip to content
As many coffee aficionados may know, Coffee Holding Co. (JVA)  has a vital interest in the success of Green Mountain Coffee Roasters (GMCR). As GMCR’s shares climbed the green mountain, the Sherpa of JVA has joined for the ride.  See JVA’s chart below.

However, we strongly believe that JVA’s shares are overpriced (P/E: 31x) and its business risks are High…Not a good Brew!   Below are our Top reasons to avoid these shares:

1.)  Coffee Holding Co. is a distributor.  Distributors trade at very low price-to-earnings and price-to-sales multiples.  By their very nature, distributors grow only as fast as the market.  Additional “growth” is usually attributed to rising prices (rather than true volume gains) or acquisitions.   JVA has done both, which has positively affected revenue growth.  Hence, its shares should receive no premium for that growth.  According to the latest data from research firm StudyLogic, Coffee demand in the U.S. rose just 2% during the 12 mos ended June’11.  Though, in fairness to JVA, this growth was driven by K-cup demand (Green Mtn.’s product).  The table below includes P/E ratios for several types of businesses.  The bar chart shows historical US coffee demand, which we estimate grew <2% yearly since 2000.  The last chart shows the sharp gains in coffee prices over the last year. 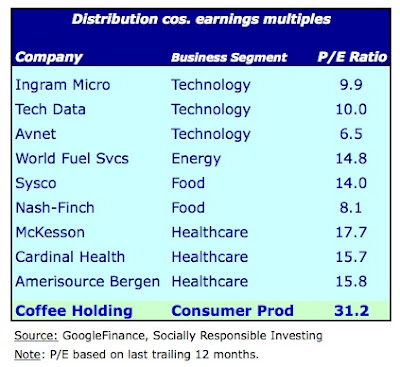 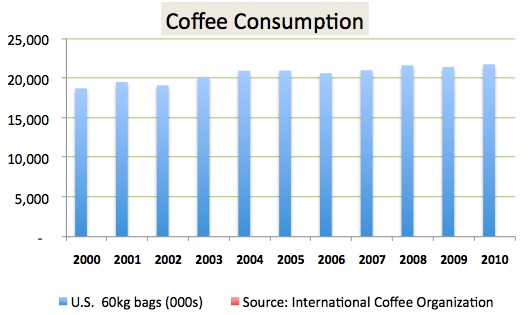 2)  JVA is a complimentor to Green Mountain Coffee (GMCR).  However, this is not a case of “Wintel” aka Microsoft and Intel, in which both companies equally benefited.  First, GMCR benefits more so than JVA because a) it commands and controls its own K-Cup ecosystem.  However, JVA is simply a distributor with no proprietary technologies; no entry barriers.  JVA does not have a trade-pact with GMCR, meaning GMCR could drop the company at will (with no consequences).  Secondly, GMCR benefits because it is a manufacturer of the (proprietary) Keurig system, which entails significantly higher profit margins.
3). We believe GMCR may be using aggressive accounting.   The Securities & Exchange Commission continues to investigate GMCR’s accounting and internal controls.  This SEC inquiry was initially reported in GMCR’s Form 8-k link of September 28, 2010 and remains ongoing.  Further, the company noted in its 2010 Form 10-K annual report link (Item 9A – Controls and Procedures) that there are “material weaknesses in its internal controls related to financial reporting.”  Should any negative headline news occur, GMCR’s business would suffer, which could directly impact JVA’s business, as well as investor sentiment across the entire coffee industry.  As a background, readers may be interested in this author’s articles Dominic Lombardo and Sam Antar’s on GMCR.
4.)  JVA is aggressively trading in the coffee derivatives market, which the company states is used for hedging price volatility.  However, we note that a) a large portion of its (green) beans business cannot be hedged directly, thus creating cross-hedging risks, b) company is trading near-term options (which easily lose time-value),  c) the dollar amounts are large, including what has been mostly trading gains.  In good times, this creates the illusion of core profits.

The Income Statements below are for FY’09, FY’10 and 2Q’11.  They include adjustments (i.e, hedging profits are taken out of reported numbers).  FY’09 adjusted numbers also exclude a non-recurring gain of $2.1mm.  This results in 36% and 73% lower EPS for FY’10 and FY’09, respectively.  2Q’11 adjustments resulted in 69% lower EPS.  Under the “% Change” column, is noted how the adjustments affect the Balance Sheet and Cash Flow Statements. 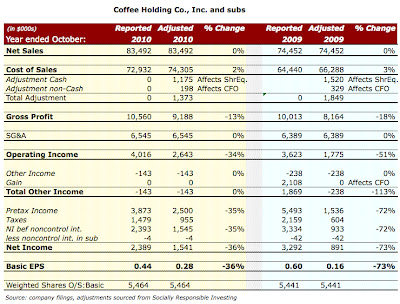 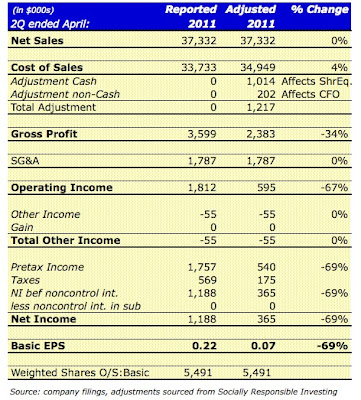 In bad times (i.e, when management makes “wrong-way” bets) reported earnings could decrease significantly (as in the most recent quarter, see below). 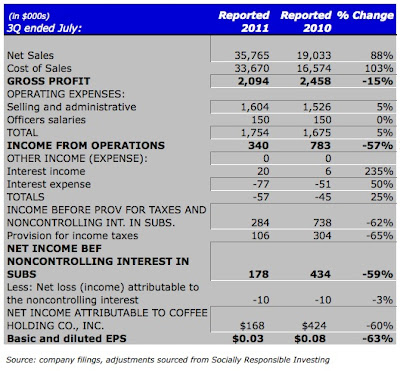 5).  Financial Leverage is increasing.  Debt/Capital rose from 14.6% during FY 10/2010 to 32.9% during the latest quarter (7/2011).  This percentage also includes margin loans from its derivatives broker.  See red highlighted below. Management recently (9/14/11) filed an S-3/A link in what is called a “Shelf” registration for a huge dollar amount of $100mm in Debt, Equity and other securities. 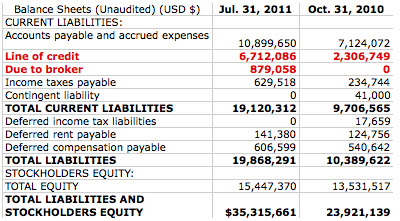 6). Shareholders have little say in JVA.  Brothers Andrew and David Gordon control the executive positions of the company including President, CEO, CFO, and COO.  The company has no “key-man” life insurance for either brother.  This is a family business with the extended family owning nearly 49% of JVA’s shares.
7).  Lack of Internal Controls:  Given the nature of the business (i.e., small, family-managed, lack of a Big 4 accounting firm) controls are somewhat deficient.  For example, JVA recently filed two amendments with the S.E.C.- the first was an amendment to the Form 10k annual report.  The second was far more serious, an 8-K essentially reporting that there was a leak of the firm’s recent quarterly earnings release (for July’11).  Consequently, it was necessary for the company to issue preliminary earnings.
8.) Numerous Conflicts-of-Interest.  A) One conflict this author has never seen is the linking of brokerage reports on JVA to its website (link).  Typically, companies tell investors which Street analysts are following it, letting investors attain the reports themselves. An example (Starbuck’s) is provided here.  B) Further, the company does (“arm’s length”) business with its 40% partner (Generation Coffee Company LLC).  Refer to Item 13 of Form 10-K/A for FY’10 for additional information.

C)  JVA director Daniel Dwyer, is a coffee trader at Rothfos Corporation- a coffee bean supplier.  Mr. Dwyer is also responsible for a large account between the two companies.  Refer to Item 13 of Form 10-K/A for FY’10 for more information.

Conclusion:
We have not seen evidence JVA is using aggressive accounting or misusing its relationships.  We also believe the company is correctly accounting for its hedging program as per IAS 39.  However, they’re just too many risks (e.g., dependence on GMCR) to justify its high share price


Disclosure:  The author has no investment position in JVA (short or long). The author does not receive any monetary or implicit dollar benefit from this article.