Skip to content
Recently SodaStream (“SODA”) reported third quarter earnings ending Sept’13.  As many readers of this website are familiar with, SODA sells DIY soda that you can make at home. Its machines are used to “fizz” water or make soda but people are learning how to fizz most anything including wine. 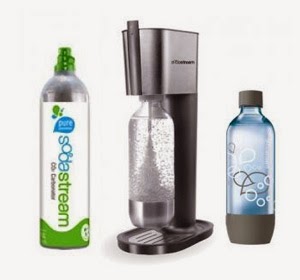 The company yet again beat consensus earnings estimates but investors were rattled when:

The chart below, courtesy of SodaStream, shows (in light purple) the slowing growth of Quarterly Flavor Unit Sales over the quarter. 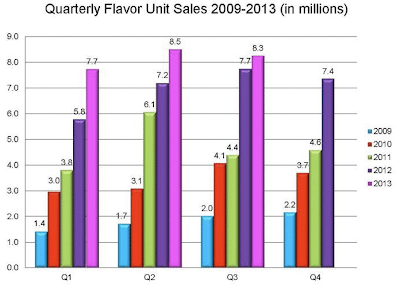 Consequently, SODA shares declined to $52.50, and were off from their 52-week high of $77.8.  The high price was emphemeral as SODA’s shares were victim to undocumented takeover rumors during the Summer.

Financial Highlights:
As you can see from the company’s financial highlights below, revenues grew a healthy 29%, boosted by strong (albeit lower margined) Soda Makers.  However, investors remain concerned over the 7% gain in Flavor Units, which is sharply lower than its historical growth. The anomaly appeared to occur in the United States, a region the company’s depending on for growth.

Management claims the disappointing Flavor growth was due to changes in inventories at its retailers (“sell-in”) compared to the actual sales from those retailers to end-customers (“sell-through”).  Management stated that sell-through growth, which can be obtained using a service called NPD, was higher than sell-in growth.

Something similar to the above occurred in 2011; however, what worries me is that the company’s Operating Cash Flow has taken a big hit in the process.  SODA is no longer in its “infancy” growth stage and should be growing cash more rapidly. However, this is not the case (see Nine-Month cash flow statement below).  Though, SodaStream did see higher Operating Cash Flow during the latest three month period. 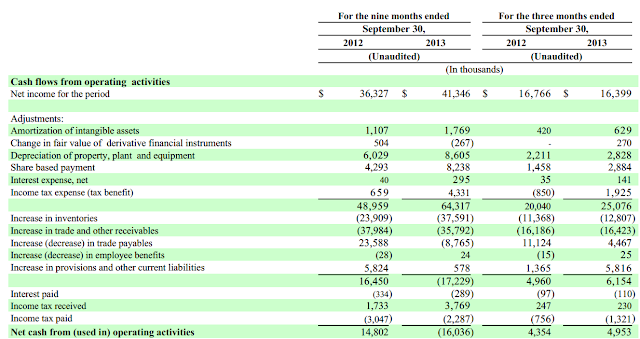 Equally troubling is a sharp decline in cash since Dec’12.  As you can see below, cash & equivalents declined to just $39mm.  What you cannot see on this table is that the company took out $20mm from its bank line. Without that, Sept’13 cash would have been just $19mm.  Some observers note that the company is spending lots of money on a new cutting-edge production facility.  However, upon closer examination, it appears that weak working capital management is to blame.

Where things are going well…
On the positive side, SodaStream continues working closely with its retailer customer-base such as Wal-Mart.  In fact, some of the large increase in Inventories that negatively affected Operating Cash Flow may be attributed to a Christmas program at Wal-Mart.  Also, the company has linked with several name-brand companies to sell their flavors including Kraft, Countrytime, Crystal Light, V8, Cambell’s, etc… The latest is OceanSpray flavors which can now be “sparkled” with SodaStream.  See the video teaser.

I think one of the most exciting characteristics of SodaStream is its innovation, some of which operates “behind the scenes.” For example, this summer Samsung started selling a fancy refrigerator that dispenses sparkling water (powered by SodaStream).  The water (and soon soda) can easily be dispensed from the outside of the fridge door. A side benefit is that the fridge door is likely to be opened much less, saving electricity in the process.

Remember, SODA isn’t an ordinary company but an extraordinary company revolutionizing the way we make and drink soda.  In the process, less waste is produced and users consume significantly less sugar than conventional sodas.

As a reminder, SODA’s business model is the “Razor-Blade” one. As such, it is still in its early growth stage (but not infancy) in the U.S. while it is in the maturity stage in Europe. Consequently, SODA is still selling lots of low-margined (about 30% gross margin) Sodamakers in the States. However, as the company matures, a higher proportion of revenues will be attributed to CO2 bottles and Flavors. Some analysts believe that SodaStream’s gross profit margin may be approaching 90% on those CO2 bottles.

SodaStream hopes to become a billion dollar in sales company by 2016 with 56% gross margins and over 15% net margins. The key will be maintaining customers (which would lower Ad & Promotional expenses) whom will purchase the higher margined CO2 bottles and flavors.

Conclusion:
The “take-away” from SodaStream’s 3Q’13 earnings report isn’t that its business model may not be working but that cash flow will likely build-up slower than first thought. This will, in turn, lower projected share-price estimates if one uses the Discounted Free Cash Flow model to calculate the intrinsic value of SODA.

While we like SodaStream as a company and as an investment, it is always a good idea to objectively seek out pros and cons including largest risk factors for any potential investment.  Such thinking, we hope, will allow investors to make better long-term decisions.

Disclosure: the author is long SODA.