For now, SodaStream’s concentrating in the United States (i.e., the Americas).  And for good reason.  Whether you call it a secular trend, or just a fad, no one can deny that SODA’s Americas’ growth is fantastic.

So then, everything must be Hunky-Dory at SodaStream.  Or No ?

SodaStream shares lost their fizz after they beat the Street’s estimates for 2Q’11.  Which makes me ponder what would have happened if they DIDN’T beat the Street!  CEO Daniel Birnbaum later (8/18/11) appeared at a mini roadshow speaking with Jim Cramer, but the damage was already done (see stock chart).

Several analysts and Seeking Alpha members were disappointed that SodaStream didn’t raise its 2011 guidance.  After all, at this rate, revenue growth would implicitly be expected to slow down to c.20%.

The lack of color in this outlook picture is surely reason for pause.  So, what’s going on in Western Europe ?  Well, according to Birnbaum, everything’s Kosher.  He basically said:

Despite all the talk about the hot Americas/U.S. business, the fact is that much of SodaStream’s revenues still come out of Western Europe (see chart below).

Also note that given the geographic proximity and close economic ties, Eastern Europe will undoubtedly be affected by a slowdown in Western Europe.  So where does that leave SodaStream?

So then, maybe SodaStream should be looking East !

Going back to my opening comments, maybe, just maybe, SodaStream should focus its energies on the East.  Wait, wait, you say that “SODA’s already in Asia.”  And to that I respond, not really….

Yes, the company is doing a small amount of business in Asia-Pacific (see above chart).  However, drilling-down it appears nearly all of it is actually in Australia and New Zealand.  Should we really call those Anglo-Saxons examples of what it means to be Asian?

Instead, I suggest SodaStream delve into China and Japan.  Japan’s consumer-profile is somewhat similar to Europe and the U.S., and we all know they love robots and other gadgets.  In fact, management did mention their intention to enter the Japanese market by this year’s end.   Also, I strongly believe that SODA should enter the Chinese market, especially since Coke and Pepsi are already educating its consumers.  Besides, the trajectory of soda consumption is salivating.  See chart courtesy the WSJ. 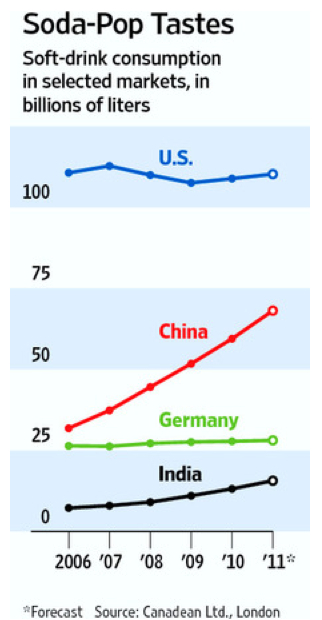 Of course, entering China and Japan has its own share of problems.  Birnbaum, cited difficulties with language, regulations and advertising contracts in Japan.

In China, the largest issue will be protection of intellectual property rights and lack of full control of local entities.  Remember…those CO2 carbonators SodaStream “sells” to you actually come with a license agreement, which effectively empowers SodaStream to collect 70-80% gross margins.

I welcome constructive comments and criticisms.  So long as we’re listening with open minds, I believe we will all benefit from them.

Disclosure:  the author is long SODA