Skip to content
Recently, we wrote about the key positive characteristics of SodaStream’s business and financials versus Green Mountain Coffee Roasters’ (“GMCR”)link.
So where does GMCR’s business concept excel over SodaStream?
Investors are going gaga over the thought of a SodaStream single-serve soda maker similar to GMCR’s Keurig brand that would be marketed to consumers.  However, we believe the economics aren’t viable for the home market.  While SodaStream competes with store bought soda, GMCR  competes with retail store-brewed coffee such as Dunkin Doughnuts, McDonald’s and Starbuck’s.  Given the labor-intensity/rents of in-store coffee,etc., GMCR’s at-home cost remains significantly cheaper compared to store-bought coffee.  For comparison, a *typical k-cup is about $0.60 compared to $1-$2 for retail store coffee.  This represents a discount between 40-75% (see Table 1 below). Furthermore, customer ratings are high (according to Amazon.com reviews).
*We acknowledge that k-cup price ranges can be huge, from $0.44/unit to over $1/unit.  Prices are even cheaper from indirect sellers such as Ebay.

While single-serve soda data is not available for SodaStream, its cost-benefit to the consumer will likely be far worse compared to single-serve coffee.  In order to determine whether single-serve soda will be cost-effective, one must first determine if the cost/liter of SodaStream’s soda is significantly cheaper than store-bought soda.  As consumers realize all too well, serving costs increase sharply as serving sizes decrease.

In Table 2 below, we analyzed the cost differences for the consumer between SodaStream’s system versus purchasing soda from the store.  We showed both SodaStream’s advertised cost/liter as well as a more realistic, or actual number.  This number is based on amounts actually reported by consumers on Amazon.com, etc.  Note that Table 1 is an analysis of single-serve coffee while  Table 2 compares cost/liter.  According to the table, at best, the consumer realizes a 23.5% discount to store-bought soda.  At worst, SodaStream consumers actually pay more for soda (and this doesn’t include the labor involved, aka the “fun-factor”).  Note that the prices surveyed for store-bought soda were both for Coke and Pepsi as well as white-label brands.   Presently, nearly all of SodaStreams flavors are white-label/private brands. 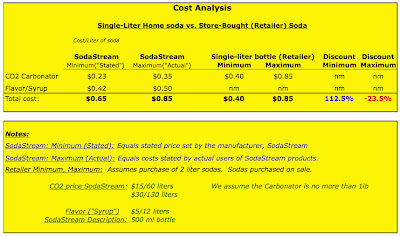 In conclusion, if SodaStream cannot produce a cost-effective product on a per-liter basis, it stands to reason that a cutting-edge single-serve soda machine would not be able to achieve such a goal.

Further, both GMCR’s and SodaStream’s  cost estimates exclude the price of the machines, which sell for  $100-$150 on average.  So then… how would Socially Responsible Investing solve this problem?

1.  The Single-Serve maker and other innovations should be targeted to the “SOHO” market.  This is because the machine would likely be significantly higher priced than SodaStream’s $100 machines, and the soda volumes would be far higher, legitimizing the machine-cost.  Further, the higher volumes would increase corporate profitability as the margins are significantly higher for consumables (CO2, flavors) compared to the traditional home-consumer market.  There is also a fixed-cost component to SODA’s operations further boosting margins. Of course, this would be a direct challenge to Coke/Pepsi, which have soda dispensers in most offices.  The key would be to “fly below the radar” by marketing to “mom/pop” businesses.

2.  Lower the sales price of the beverage machines: The company already makes a decent margin on them and could afford to do this. Reducing the machine price would also strengthen the company’s business model, and increase longer term profits (as the blades bring in higher gross margins compared to the razor-blades).

4.  Utilize and leverage core competencies (i.e., technology).  When this writer heard that SodaStream was Israeli, the first thought was Jewish “Silicon Valley” where several innovative companies are based.  SodaStream should license its technology to white-lable brands and boost R&D. This would be a better use of R&D dollars compared to consumer single-serve.  It is requested that management disclose R&D numbers in its financial statements.

5.  Make alliances with soda beverage companies for brand-name & proprietary flavors. The most frequent complaint among users is that several of the flavors are “just aweful.” Many noted that SODA mixes sugar substitutes into their flavors, leaving a horrible after-taste.  We note that consumers’ ratings on SodaStream are worse than they are for Green Mountain Coffee Roasters.  This problem must be immediately addressed to lower long-term customer loss-rates.

6.  Market to consumers an easy way to return the empty CO2 refills.  Netflix can perhaps “lend a hand” on this!  This is the second largest complaint by users.  I would suggest the company negotiate with UPS and offer its customers prepaid envelopes to return the empty C02 refills.  SodaStream should also increase control of its complicated distribution network in the U.S.

7.  Become a truly Socially Responsible Company by investing in local communities, investing in its employee community and by creating a set of metrics to measure the company’s production of greenhouse gases, etc.  The company should acknowledge that transportation costs for refills does create significant greenhouse gases.

Lastly, it should also address the controversies over its West Bank plant location.  SODA’s principal manufacturing plant is located in Mishor Adumim, an area in the West Bank that is the subject of dispute between Israel and the Palestinian Authority.  There has recently been negative publicity against companies with facilities in the West Bank.  And a number of activist groups have called for consumer boycotts of products produced in the West Bank.