I first noticed CHC Group (NYSE: HELI) in 2014 when I was examining the Energy Industry. As a former industry analyst I thought that its business of flying workers back & forth to offshore oil rigs was highly sensitive to oil prices, despite being classified as a transportation company. HELI has the world’s largest helicopter fleet (231) serving several geographic locations, of which over 81% of FY’15 (ended 4/15) revenues are to the energy end-market (i.e, E&P companies).

What caught my eye was the company’s sloppy-looking financials and its huge 10k report.  While the left-brain side is important for company analysis, it is the right-brain that makes investing more of an art than science!

The chart below shows the yearly change in SPDR Oil Service ETF (XES) versus CHC Group (HELI).  Clearly they are correlated.  Further, CHC Group performed much worse than its peer group since Jan’15 due to its high financial leverage.

After seeing CHC Group’s recent stock price trading under $1.00, I thought why bother writing about this.  It’s too late! But then I remembered all the soured investments in penny-stocks I had made as a novice trader.  At that time, I thought these volatile issues just needed to go up 50 cents and I’d sell.  However, investing in low-priced stocks is a fast-lane to the Poor-House.

This article is for all my fellow investors that have no access to brokerage-reports, not even Seeking Alpha has written much on HELI.  So then, maybe this is my social responsibility to investors!

We all know that commodity prices are weak and oil is now trading below $50/barrel. I’m a big believer of Contrarian Investing. However folks – playing a risky small company is not the way to do it – Exchange Traded Funds are.

Business Outlook:
CHC Group’s business is closely tied to worldwide E&P budgets, of which is correlated with oil prices and the number of drilling rigs. While CHC’s business is most closely tied to offshore global drilling, the chart below (from Baker Hughes) is quite useful as it shows the number of months before the industry actually hits bottom. 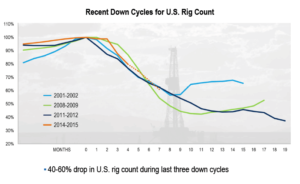 Below I will briefly list the main reasons why investors should avoid CHC Group.  Essentially, this is a small company bleeding cash that has a highly leveraged balance sheet.  If existing trends continue, the company will likely go into bankruptcy proceedings, or undergo a debt-recapitalization in which a private equity company such as Clayton, Dublier & Rice (CDR) takes over the company. Should this happen, equity holdes will be wiped-out.

So what’s CHC Group worth?
Given that the firm does not pay dividends, hasn’t made money, and has negative equity, an investor or potential buyer cannot value the company using conventional benchmarks such as P/E ratio, Price-book ratio, or dividend discount model.  A discounted FCF model may be used but the company doesn’t have positive cash flow so that would be based entirely on assumptions.

So we come down to Enterprise Value (EV).  Even here, one cannot simply use reported debt of $1.2bn as there is another $1.2bn or so of OBS debt.  After including the above, adding preferred stock and netting against cash, CHC’s Enterprise Value is $3bn. Buyers typically pay a multiple of EV, however, in this case a potential buyer would likely wait for a distressed situation, then pay a low multiple given that the debt would be trading at a low market value.

Conclusion:
While the average investor may not appreciate every detail of this article, my goal was to protect you from making a hasty decision. There are many investments as well as turnaround situations that have much lower risk and higher returns.

Penny stocks are for the birds.  On 7/23/15, the NYSE notified CHC Group that they have 6 months to bring their shares over $1.00 else face a delisting.

Disclosure:  The author has no position in CHC Group (HELI) and has not received any direct or indirect compensation for this article.