Skip to content
SodaStream manufactures machines that allow users to make sparkling water, and customized soda using ordinary tap water.  For background information, please refer to this website’s SodaStream archive.
SODA’s earnings-stream has been good. However, as many readers noted, SodaStream’s shares just can’t get their act together. Who’s selling & Why ?  I don’t know, but I don’t think it’s just short-sellers because they’ve already effectively sold much of the float short.

It appears long-term investors don’t feel comfortable holding shares given uncertainty over:
– the product being a “fad”
– the unfolding Euro-Crises
– its “bleeding” cash flow

Those investors that do own shares tout about the product as if it’s the next best thing since sliced bread. While I agree, I believe forecasts need to be supported with data (see “Points” below). These Points are derived from a working Financial Model. Feel free to utilize the Model, but do source Socially Responsible Investing. (Note: financial figures are in Euros.)

Point 1:
Changing product mix, from SodaMakers towards Consumables will increase gross profit margins (GPM) and affect the Revenue Mix. SodaStream’s Razor/Razor-blade business model benefits significantly as the business matures.  Initially, SODA’s goal is to increase household penetration by getting Sodamakers into everyone’s hands. However, Sodamaker gross profit margins are low (about 30-33%).  Little of that flows to the “bottom line” as marketing expenses are high.  Though, once household penetration reaches key levels, the company will refocus to retaining existing customers and marketing consumables (e.g., Flavors and CO2 refills).  I estimate that flavor GPM are over 50% and CO2 refills are over 75%. Thus, changing product mix will significantly increase SodaStream’s profitability (e.g., EBIT margins).  (Note: Management’s EBIT margin goal for established markets (e.g., Switzerland) is 25%.) 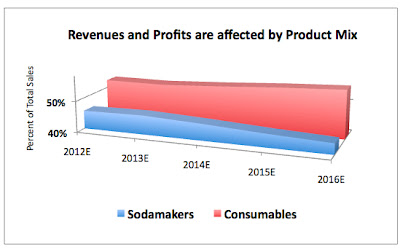 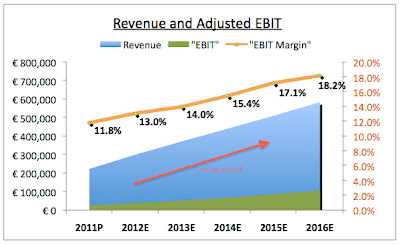 Point 2:
Marketing costs, notably, Advertising & Promotion (A&P) costs will decline as a percentage of revenues as the company’s products become nationally recognized.  Since 2010, an undue amount of dollars have been spent on educating the American consumer.  I estimate that 16% of revenues are spent on A&P, with nearly 60% of that going to the U.S.!  This will decline by 2014 as consumer awareness reaches critical mass.

Point 3:
The bottom-line will grow faster than the top-line as the company benefits from certain fixed operating costs.  Without being specific, management has said that nearly half of its General & Administrative costs are fixed (source: 4Q’10 conference call).  In the Financial Model, I identified these costs as “Note 2.” The full benefit won’t occur until after 2015. Items with some fixed costs include:

Point 4:
As geographic mix shifts to the Americas (the U.S., etc…) profitability will rise.  This is because the average global consumer utilizes 4 Syrups and 3 CO2 Refills yearly.  However, U.S. consumers use up to 8 Syrups and 4 CO2 Refills.  Consumables have significantly higher gross profit margins than Sodamakers. Also, the Americas distribution method is more profitable given that it’s Direct and homogeneous.

Point 5:
As the company (and its distributors, retailers) ride the “learning curve” and as “economies-of-scale” ramp, cash flow from operations should surge.  This can be seen in the model where better working-capital management (e.g., faster inventory turns, shorter accounts receivables days) reduces the drag on cash flow. The table below shows both Cash Flow before and net of changes in Working Capital.

So just how “Sizzling” will SODA’s earnings be?
The focus of this article was to quantify the hidden earnings potential of SodaStream, which cannot be readily seen on superficial analyses.  My earnings estimates and Price/Earnings ratio are shown below.  (Note: EPS assumes a constant $1.30/EUR Fx rate and 21mm shares outstanding.  Current share price: ~ $38.) 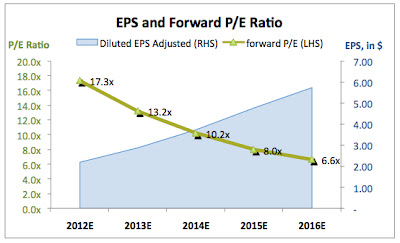 Disclosure: The author is long SODA, with an expected holding period of five years.