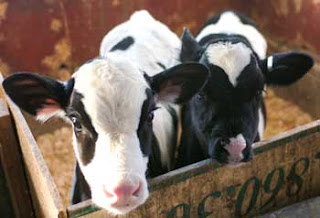 Milk, one of America’s oldest staples, has been in households since the turn of the century.  This was the drink of choice, before the likes of cola or sports drinks.  As you can see below, its height peaked in the 1960’s.  Since then, the milk industry (especially Plain Whole Milk) has been in a gradual decline (click table below). 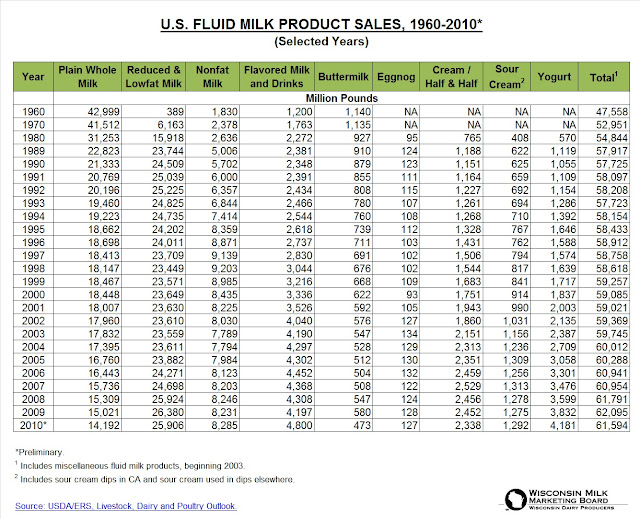 This decline is risking the livelihood of farmers.  Skimming profits has been increasingly difficult due to the current economic situation.  Dr. Roger Cady’s research (a dairy specialist from Washington State University) surmises farmers are being forced to pack cows and keep larger herds in smaller (and most likely, less green) pastures to turn a profit.  Land is a valuable commodity and getting more out of less acreage yields better profit margins.  The average (family) farm previously had no more than 200 cows and will now wind up at the 300 mark minimum, just to breakeven (see chart)! 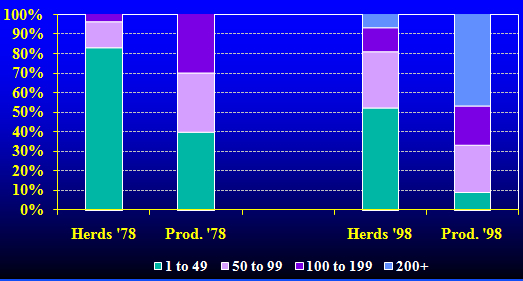 2000 NMPF Dairy Producer Highlights
From a land and capital perspective, this is more efficient, but what does this mean for the cattle?  Without subsidies or tax incentives from the government, the milking industry will eventually become extinct.  After researching the depressing fate of the milk industry, a friend and I went on pursuit of a sustainable option, if any are left…
We found Ronnybrook Farms – a New York farm that walks the non-organic path.  My friend, whose been slowly moving towards becoming a vegetarian, stumbled upon Ronnybrook at a local Farmer’s Market.  He had been thinking of stopping milk consumption after watching a disturbing video on the mega-Dairies of industry.  He decided to taunt and question a Ronnybrook representative (who happened to be the owners’ daughter-in-law).  Her answer would be his final justification for not drinking cow juice.  Boy was he in for a surprise!
Ronnybrook has made a commitment to humane treatment of animals as well as sustainability.  There are certainly no economic benefits to keeping such a small farm (the farm only maintains approximately 100 cows in total).  Ronnybrook’s corporate stance is to do right by the animals and this will provide a better end-product for both the environment and for human consumption.
So what is it that makes this farm stand above the rest?
Socially Conscience:  Ronnybrook still uses glass bottles – recalling one to the days of The Honeymooners TV program.  Ronnybrook’s motto is “Hopelessly out of date, and proud of it.”  Ronnybrook would rather use glass bottles and get more uses from the container and save the environment, than go for the cheaper carton or plastic options.  A sharp contrast to the market trend….
Passion: We actually went on an unplanned tour of the Ronnybrook Farm, in pursuit to verify their claims in regards to the facility and the treatment of animals.  Rick, one of the owners (the Osofsky brothers), actually stopped in the midst of whatever he was doing (he literally left his car running) and joyfully took us on a tour of the facility.  He asked about our backgrounds, etc. before initiating the tour.  And this wasn’t just any tour – a two plus hour tour – covering everything from the mechanics of butter churning, chemistry, regulations, the family tree of Holstein breeding, an ice cream sampling (beyond delicious) and a viewing of their magnificent mountain top meadow.  (Remember, all this time, his car was idling.)  You could feel the absolute pride in what they do, which is a rarity to find.  And most importantly, you could feel Ronnybrook was truly a happy place.
Cow Whisperers: The cows are treated like family – where in the world does this happen?  The cows actually have their own mattresses and receive medicine when sick.  Each cow is named by family members, depending on their features and personalities.  There’s Trevor, Claire, ToyStory Arrow, and of course, Fric and Frac !  I personally have never seen animals treated so well.  They keep their offspring with their moms after birth, rather than dragging them away as done in industrial farms.  Cows are not stupid, have emotions and often pout for days when their calves are taken from them.  Ronnybrook’s pasture and stables were impeccably maintained.  The animals looked clean, healthy and happy!  At the time we visited, the cows were in their stable; however we could tell they were happy because they were quiet and content, though a bit curious of their new houseguests!
Character: This is the mire point, where we get into doing what is right for oneself or one’s bottom-line vs. doing right by the animals, the environment or what others think is just.  Ronnybrook emphatically states that providing medicine to sick animals is MORE humane and that fact is worth not getting the “organic” stamp of approval.  This shows true compassion, but is this a smart business move to lose the “organic” label?  Ronnybrook does not believe the label is worth compromising their prized Holstein cows.  Cattle should be cared for like any living creature – why not help cure them when they’re ill too? 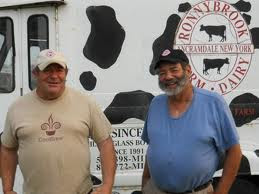 This leads us to our next question – is “organic” worth it?  What is the value?  Is it just hype?  Is it really worth paying extra?  As the demand for organic food has risen, prices have remained significantly more than conventional food.  One questions the value, or the cost-benefits that organic foods provide.

The USDA has 4 rules for milk to be considered “organic”:
1.     no bovine growth hormone (BGH)
2.     no antibiotics
3.     no pesticides in cows’ feed
4.     access to pasture
USDA Organic Standards
Taking these rules a step further, perhaps there is no added health value to organic milk.  Conventional milk is safe and healthy for consumption:

1. BGH is a protein hormone.  If ingested, our digestive tracts will destroy it.  However, from an ethical point of view, note that BGH leads to higher levels of udder infections.
2. Milk is routinely tested to ensure the milk has no antibiotic content. You cannot purchase milk in the United States with any antibiotics in it!
3. Similarly for pesticides – while there are trace amounts found in regular cow’s milk, they are at levels far below what has been established as tolerable for humans. Organic Milk – Is it worth the cost?
MSNBC covered this topic at length (see Organic milk: Are the benefits worth the cost? ) and concluded there is no real merit to the value of organic milk, “research does not support a health advantage of organic over conventional milk for any segment of the population. “

Ronnybrook has a long term stand on this issue, and has even made the pages of The NYT:
“Our farming methods are by all practical measures organic, if not beyond.  We use no pesticides on our fields, manure is our fertilizer of choice and we use cropping techniques that promote healthy soil.  Our cow’s diet is a healthy, natural one.  We strive every day to make sure yours is too.  So, what is the difference between dairy farming practices at Ronnybrook and practices on organic dairies? Check out the chart below and we hope it is clearer that if dairying organically is a goal to strive for then Ronnybrook has clearly reached that goal and has moved beyond it.“
Ronnybrook Farm – About the Farm
After some extraneous researching and soul searching, organic foods feel healthier for the individual and more sustainable for the environment.  Organic milk, though, does not deem that same value in all regards.  Organic appears to be just a label and one needs to dig deeper into the actual practices of the farm or dairy in question. 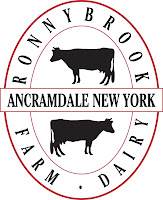 What are our Conclusions?
·       Milk Consumption, despite all the got milk? ads, is down and does not appear to be coming back.
·       Farmers’ in the milk industry are increasing their herd size and lowering their pasture to cow ratio to yield better profit margins, which goes against the long-term sustainability model.
·       Ronnybrook Farms is maintaining a socially responsible, sustainable non-organic farm, despite the superficial trend that organic dairy is the way to go.
·       Despite the above point, overall, organic foods are healthier for the environment and for the human body.  Though, we urge consumers think through before making purchase decisions and buy from groceries that do.  We believe Whole Foods Markets is a good example.  (Note: Whole Foods is a socially responsible company overall.)
·       Non-organic vs. organic milk differences are minimal according to the cited study.
After taking a tour of Ronnybrook (they strongly encourage their customers to reach out to them to do so) – they are true to their word, cow mattresses and all.  Let’s hope they can stick around for awhile…