As most know by now, SodaStream’s (SODA’s) machines allow consumers to make sparkling water and customized sodas using ordinary tap water. This time around, Yonah highlighted the big and immediate 2,900 store roll-out at Wal-Mart. He also mentioned new products, and there are always new products from this nifty company. You know…patent-pending “snap & lock” mechanisms, the LED “Fiz chip”, and “sodacaps” ala Keurig – also patent-pending. SodaStream would like everyone and their grandpops making Soda-pops. 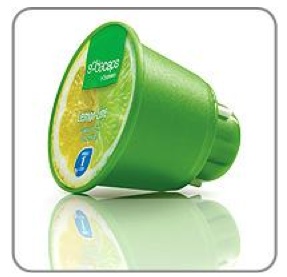 Daniel Birnbaum and Yonah Lloyd typically ask the audience to raise their hands if they know SODA’s product, then later give real-time demonstrations and tastings for the thirsting crowd. Yonah also highlighted last quarter’s great earnings. During a later 1Q’12 call, revenues and earnings were revised upward. Despite all the optimism, some investors are shorting SODA, in fact 10 million shares worth, which equates to 56% of their float, (2nd highest on Wall Street).
Investors having “issues” with Sodastream are concerned about:

Those investors that do own the stock, talk about how enjoyable the sodamakers are to use, and the company’s rapid earnings growth. So then, who’ll be right in this tug-of-war? For that, we visit the issues below:

Euro-Crises: I believe that the Euro-Crises will eventually “catch-up” with the company, though less so than most global companies given that its product is a “value proposition” and due to its low exposure to Europe’s sick periphery countries. As recently as 1Q’12, management said European “traction was good” in particular the new French market, as well as Switzerland, Germany,and the Nordics. (Note: as this article was being written, Moody’s lowered Germany’s credit outlook to negative.)

Bypassing CO2 refills: Some investors are bearish on the company because the CO2 refills can be bypassed using two methods. First, consumers can simply go on the Internet and find ways of making their own soda using conventional (and huge) CO2 tanks. While true, this is unlikely to happen for several reasons including safety, ease-of-use, space issues, etc.
There’s also the risk of “white label” brands, meaning an outside company can produce its own CO2 containers that are exactly the same specifications as SodaStream’s. I believe there is some credence to this in certain parts of the world, but not in the U.S. (which will be the largest market within five years). U.S. law is more favorable towards corporations and also note that SodaStream’s CO2 refills are protected by U.S. patents. In March 2012, the Swedish Competition Authority (SCA) terminated its investigation of SodaStream’s CO2 business. If SODA lost that case, it would have had to allow other third-party refillers. And that judgement could have been used as a template for cases in other countries.

Home Sodamaking seems like a Fad: Some say that SodaStream’s products are just a craze driven by the Healthy Foods Movement. Seems to me these accusations are a fad! First of all, fads take time to gain momentum. But by this time, investors could have sold the shares, as most investors keep their shares for just a few months (see chart below). This makes the fad argument illogical.

Negative Cash Flow issue: I created a free cash flow (FCF) discount model. The model answers the last investor issue (that the company’s bleeding cash). The company does have negative cash flow in 2011, however, this is projected to turn positive this year. In fact, management expects positive cash flow as soon as the next reported quarter (2Q’12).
I used a WACC (weighted average cost of capital) of 11.3%, which is a blended mix of the cost of debt and equity. I believe SodaStream’s WACC should be at least 11% given the shares’ volatility. (High volatility, or Beta is associated with higher costs of equity.)

Year 1-5 free cash flows are projected to grow at a 35% rate, slowing to 3% longer term. After discounting FCF, I attained a calculated price of $74.60/share for a 49% discount to the current share price. Values were converted at an exchange rate of $1.30/EUR. 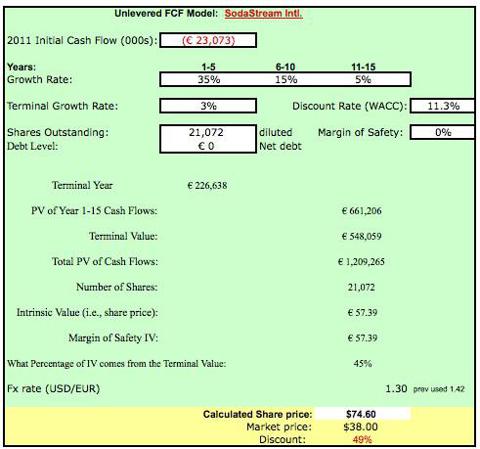 As readers may have concluded, I believe they’re focusing on the wrong issues. SodaStream releases earnings on August 8th, and I believe investors should focus on these questions:
1) Does SodaStream still feel somewhat immune to the Euro-Crises?
2) How effective has the Fx hedging program been (especially for the Euro)?
3) What is the attrition (i.e., churn) rate for the U.S. market?
4) How is management addressing the West Bank (Israel/Palestine) issue?