Skip to content
The time is near.  The EU’s game of Chicken is ending.  In fact, Europe’s just reached…
The Point of No Return

When will the European Crises hits its nexus?
According to behavioral finance, trend theory, etc.., I believe this will most likely occur during the second week of February 2012.

Market indices (both equities, bonds and capital markets overall) are likely to have their usual Christmas Rally and January Effect during the next several weeks. Then sometime after January it’ll all be over.

Background to the Euro-Crises:
Many reasons have been cited for the Euro-Crises, with the “blame-game” starting in the U.S.  (i.e, Wall Street exported it’s derivatives/mortgage mess) to changes in regulations, i.e., the Basel Accords.  Basel II essentially said that Banks didn’t need to set aside any capital for sovereign debt, but lots of capital for most other debt.  This diverted loans from corporates towards Sovereigns.

However, we do not accept these arguments, as most just look to shift blame. We
believe the Euro Crises stems from economic mismanagement and lack of fiscal discipline.  In the same light of weight-gain, we believe the aptly-named PIIGS of Europe were glutenous for debt.

Individual countries are accountable for their actions.  However, the root cause perhaps came from a “Group Think” mentality, whereby the Eurozone was created with a Monetary Union (i.e, European Central Bank, Euro common currency) but no fiscal union.  We believe fiscal integration and intergovernmentalism is a political impossibility.  The Maastricht Treaty via its “convergence criteria” limits budget deficits to 3% of GDP and Debt to 60% of GDP.  However, this is not legally enforceable, and so failed (see chart).  (All of the charts can be enlarged by clicking on them.)

Further, a Monetary union without a Fiscal union is a fundamentally flawed model. This led to many consequences including a large current account (i.e. trade balance) in Germany and negative current accounts with the PIIGS.  Historically, the German D-Mark would have risen, while the others would decline, thus realigning trade flows. Germany is a clear beneficiary of this model’s flaw.

The EU has given the world a daily dose of ideas that increased capital market volatility. Two examples are listed below:

1.) Italy’s Term Structure of Credit Risk has inverted.  That is, Italian short-term sovereign bond yields (and CDS prices) are higher than its long-term yields.  (Note that typically yields/CDS prices rise as tenures lengthen).  So what’s happening?   When ST yields (or CDS prices) are > LT yields this means investors are looking for a near-dire situation short-term, but expecting LT improvement.  This phenomenon is an inversion of the Term Structure of Credit Risk.  See charts below:

According to the table below, Italy’s near-term CDS is trading at approximately the “Ba” equivalent rating, however, note the sample size is small below Baa.

2.) European banks are insolvent as per Basel III regulations:  This means not only lower capital, but a reverse multiplier-effect (i.e., less lending).  Even officials from the IMF are worried.Article I, Article II.

4.) The US equity market declined during Thanksgiving week, the worst since 1942.  (Thanksgiving wasn’t recognized as an official holiday until 1942.)  Such abnormal price-action is usually indicative of worse times to come.

5.) European Bond Yields and Credit Default Swaps are significantly higher, and rising rapidly.  CDS prices for Europe should be under 100bps.  Italy’s bond yields and CDS are hovering at 7% and 470bps, respectively.  Note that Italy is the third largest bond(Article) market in the world.  Italy is also subject to “hot money” as over 40% of bond market participants are outside the country including Hedge Funds and Asset Managers.  Italy is too big to Bail.

6.)  The mighty Germany had a failed Bond Auction two weeks ago.  See foxbusiness story.  Again, fundamentally this shouldn’t have happened, indicating cracks in the internals of the market.

7.)  Austerity plans won’t work as tax revenues are likely to decline due to recent evidence Europe is rapidly falling into recession.  Lower economic growth will cause sovereign borrowing rates to rise,  in turn choking economic growth (i.e, a negative feedback loop). We base this on data provided by OECD and Markit Economics. 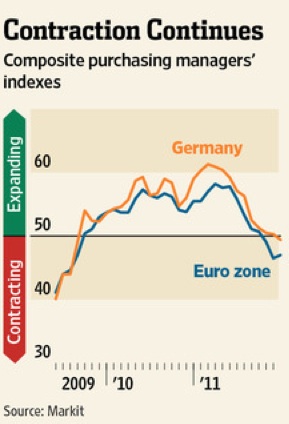 8.) Since June’11, liquidity has declined rapidly.  Money Market funds that buy USD commercial paper have changed their purchasing behavior due to new Basel regulations that require they hold shorter-term securities, and that they have higher cash reserves.  (We note though that the recent USD/EUR currency swaps recently set up with Central Banks appear to be temporarily alleviating the situation.)

8a) Further, Asset Managers, Commercial Banks and other long-term holders of debt are also expected to drain liquidity from the global market.  This is because as part of the Greek bailout (and quasi-bankruptcy)  Greek Credit Default Swaps could not be redeemed, as a Credit Event would not be triggered under ISDA. Click Here for Press Release.  Consequently, professional investors can no longer hedge their European exposure.

9.) Counting on China as a European savior is no longer an option. China’s “growth-at-all-costs” model is showing signs of fatigue, according to Markit.  The government just lowered reserve-requirements(link) to keep its own Bubble from bursting.  Politicians must also deal with social unrest, especially as its economic growth nears the key 7% level which is needed to maintain social stability, according to Time Magazine.

Conclusion:
While the Euro-Crises has evolved over the last two years, the Crises has worsened to the Point of No Return.  The EU can no longer continue “playing chicken” with the market.  Times have changed – China can no longer afford to save Europe, borrowing rates are unaffordable and the Eurozone is entering recession just as austerity plans are kicking-in.  Europe can no longer save the world from itself !